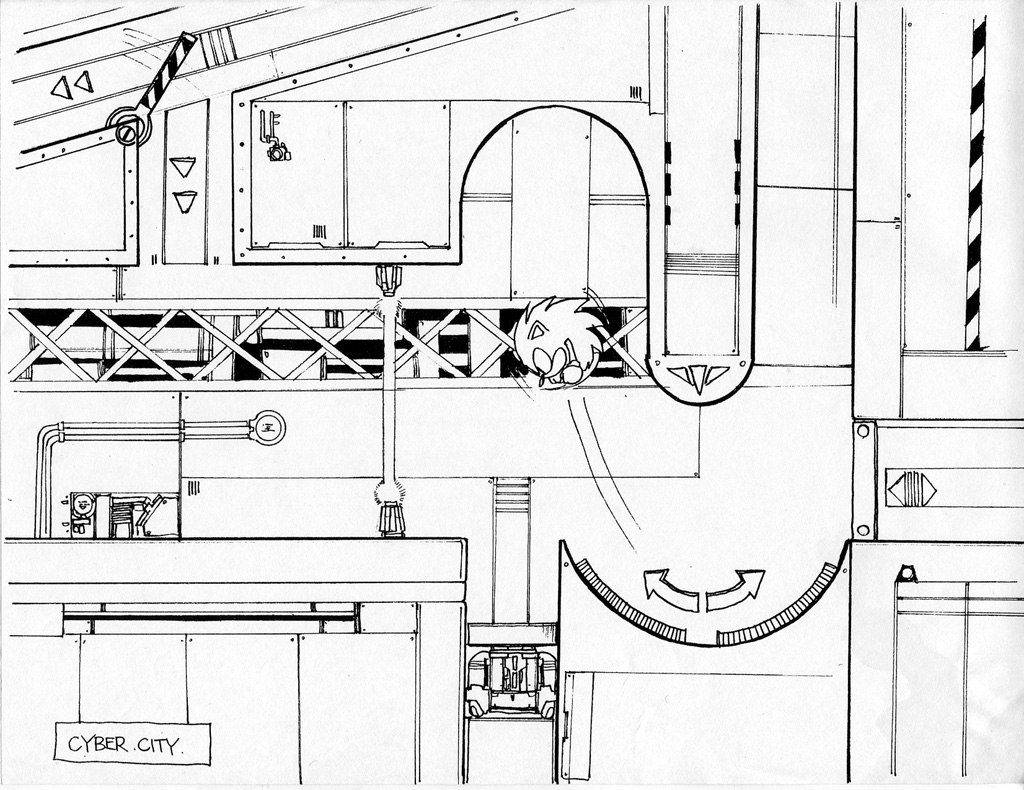 These drawings depicted the more or less definitive ideas for the level art which was to be made by “Zone Artist” Tom Payne.

The level known as “Genocide City” had its name changed to Cyber City and was then scrapped altogether, shortly after Tom Payne started drawing the in-game art. It indeed looks like your typical hi-tech level seen in Sonic games, as some of the ex-STI members had previously mentioned.

it was supposed to [be a] dark Robotnik machine world, but i don’t recall seeing any shots of it

Here’s a brief explanation of what happened with the level:

there was a plan for me to do 2 levels, but early on we realized there wouldn’t be time (I think Genocide City was going to be the one?). So I’m pretty sure that’s why there are three levels to Metropolis Zone– since I wasn’t going to do another Zone, I had time to do another level.

This concept inspired Tom Payne to create the graphics for an unreleased Genesis game called B-Bomb, which were then modified and reused for the Sonic Spinball level “The Machine”, still making use of the original purple color scheme.

You can see some similarities between both levels, such as the trap doors which open alternate paths.

The original concept included some diagonal conveyor belts which were ultimately scrapped, coincidentally just like happened in Sonic 1 with the Clock Work Zone.

Redder background aside, the color scheme looks quite similar to the final Metropolis Zone.

Illustrations by (?). Provided by Tom Payne.

Original link for this article: http://www.sonicdatabase.com/S2CD/s2clevels.html

The secrets of Thor (ZX Spectrum)