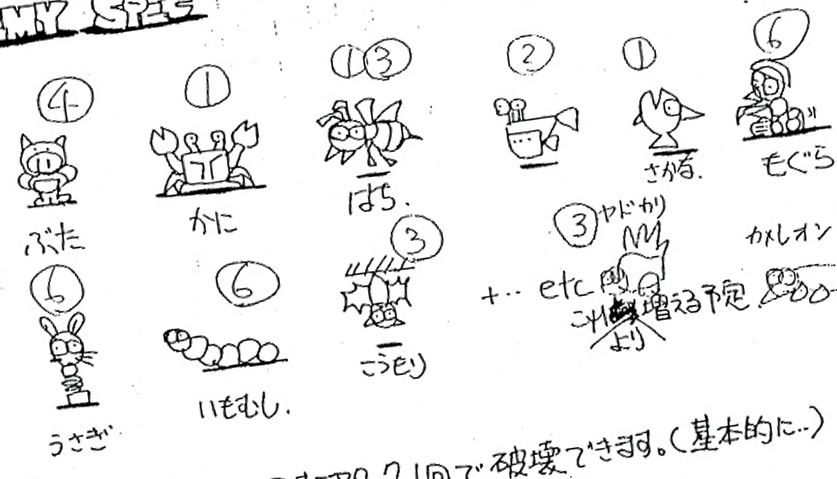 Let’s take a good look at them!

Sonic design for the cover:

The original story of the test pilot:

And the emblem on his jacket:

This one uses a “near-final” Sonic design, in which his first spike is shorter and doesn’t cover the entire ear (something which was also seen in the SegaSonic The Hedgehog arcade prototype and was corrected for the final version).

Old designs of Sonic with more spikes than usual:

We had already seen a color version of these, in the documentary “History of Sonic”:

Level concepts from before Sonic’s final look and skills had been established:

In the first image, we see Sonic destroying a bridge by rolling over it.

In the second one, a type of gravel terrain is shown in which Sonic would roll slower.

Here we see how one of Scrap Brain’s obstacles had to be modified, due to hardware restrictions:

Regarding the last struck through concept of Scrap Brain, it could be a controllable platform that rises at a constant speed, similar to the Tidal Tempest cork in Sonic CD.

Maps and blocks for Green Hill:

Interestingly, near the exit of the upper tube there’s an entrance to the Special Stage, in the middle of the level:

The Caterkiller has two more segments than in the final version.

Each enemy has one or more assigned levels (with Bomb’s second level being left out of the scan):

One of the designs shows Sonic dying scorched, a concept previously used in games like Wonder Boy and which could explain one of the discarded sprites:

On the page with Robotnik’s animations, the Prison Egg has a device attached that’s reminiscent of some unused graphics which, even in the final version of the game, are loaded into the video memory next to those of the prisons:

Comparing it with the two seen before, we see that it’s an intermediate version between them:

This is a never seen before, updated version of the well-known illustration, with revised designs for Sharps/Max the parrot and Vector the Crocodile (who is already beginning to adopt his “Ben Ali” look from Chaotix):