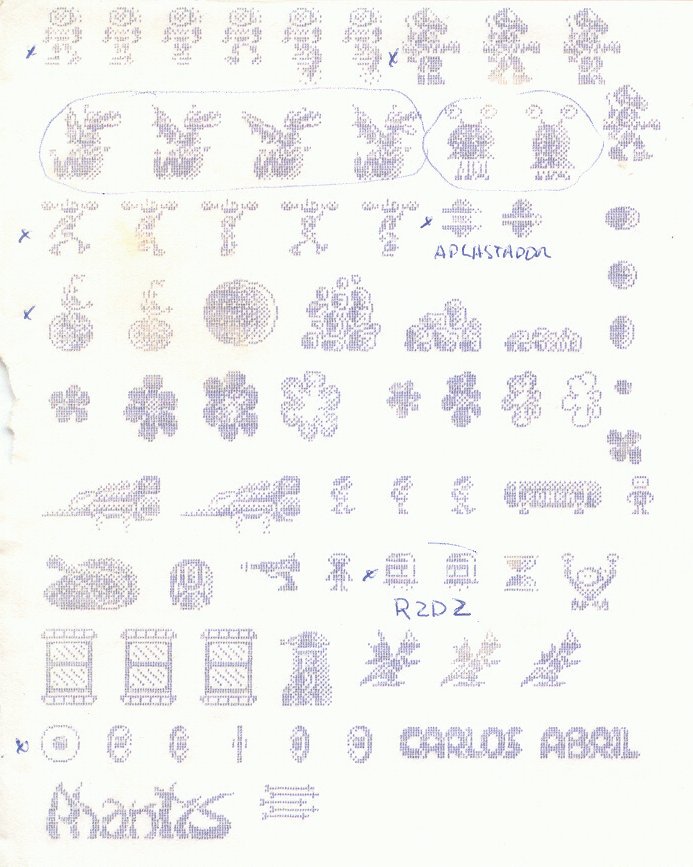 Carlos Abril has commented on several occasions that Dinamic’s classic Phantis had some important changes made between its conception and the final version.

In an interview with GamesTM magazine, he explains how the first version of Phantis was, before he decided to completely redo it:

At that time I was already making a “bigger” game, but I didn’t want to show it until it was finished. We simply told them that my brother Nacho’s game had been made quickly for Future Stars and that I was doing another one, but with the aim of making it a game that would be released as Dinamic’s.

Phantis began as most games of that time, from routines that were programmed to get a happy idea done, to fit a game into the speed and memory of the Spectrum: sprite systems, map systems, etc.

Before that, I was making a game with a Saber Wulf-like 2D map, which was my reference game at the time, “Valín” I called it. An immense map mapped as an array of codes that indicated the number of graphics I used and with the XOR painting routines.

But things were evolving and the first games with mask sprites began to come out and that was a new challenge, so I went on to program the mask sprite routines and do the mapping system, instead of with a 2D array as a list of objects that were on the screen, with its X, its Y and the number of graphics without all having to be the same size. It also had lots of rock graphics, stalactites and stalagmites.

Another game which I loved graphically was Underwurlde; I started to make a map of caves and to make sense of it, a surface where a ship arrived and the character, who was initially an astronaut, came out. He went down to the caves, had to go killing enemies, very diverse although almost all of them did the same thing: the small fliers which were generated and bounced, and the large ones that came from the sides and roamed the screen.

You had to enter the cave, which was more labyrinthine than in the final version, look for a place where you got a chicken, Atic Atac style, and you went to a place where there were some small hungry little people, the Inim, which if you didn’t have the chicken went for you and killed you. And if you had the chicken and threw it, they went for the chicken to let you pass.

You went down to a lower area where there was a large lunar vehicle, you climbed inside and traveled the entire lower zone running over the enemies, reaching the left area of the map where you left the vehicle and climbing into a lava area with giant jellyfish (the size of the character) that you had to avoid while jumping on the platforms, and you reached an end point where you rescued a girl.

When my brother was making the game [Nonamed] with the new graphics, one of the times we went to show the results, I brought a cassette with my game almost finished. So I loaded it and, when I was showing it, nobody spoke; so a lot of ideas were going through my head, especially since when I was showing it, I was seeing things that I had already seen lots of times and didn’t seem funny anymore.

When I finished showing it, the Dinamic crew went to another room and I was left cold. After a while they came out excited, talking about the potential of Spanish developers, the quality of the latest things they had been sent and similar stuff. But I went back home and changed the game completely.

The character became a girl, I changed the map and redesigned it so that the surface stage was longer; and you no longer had a weapon, but you became friends with a jumping ball that you sent to kill the enemies and strengthened the weapon with a magazine with which you could shoot faster. The chicken disappeared, the Inim, the car (because there was no memory left for all those things), the lava stage was preceded by one with quakes and you arrived at the prison where you rescued your “beloved” (who was the main character of Nonamed).

We later recovered the Inim for Zack Zero, but the idea came from that time… I had to remove them because there was no memory left for them, but I loved the little characters.

It ended up being a much more solid game and everything was changed in about three months (at that time we went to school every day, like anyone our age), and the next time I brought it I had already changed everything.

About the astronaut who initially starred in the game, he also comments on Twitter that it was taken from a graphics pack that appeared in the MicroHobby magazine (see: The mystery of the Speccy astronaut).

On some occasion I have said that I made a first version of Phantis which since when I showed it there was a lot of silence, I went back home and completely changed it. Which had jellyfish and dragons and a very cool space car (it doesn’t appear in that sheet).