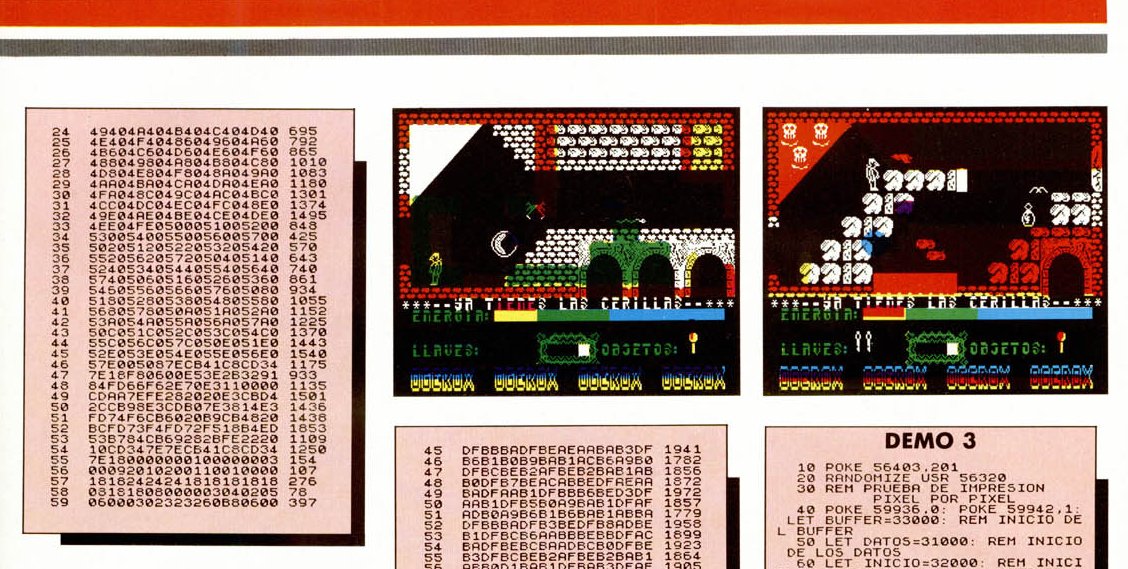 The most assiduous readers of Spanish magazine Micro Hobby will remember a programming course published across five issues, in which the explanations were accompanied by several example programs based on the code of a Spectrum game called Ogerox , created by Alberto Elices Vallejo, Roberto M. Oliva and Javier Elices Vallejo, which in theory could be fully compiled by the end of the course… though in practice, as Ignacio Prini (AKA Neil Parsons) already showed us in his website Project Basic ZX, such thing would be impossible to do, not having published part of the listings.

After contacting Roberto, the game’s graphic designer, he confirmed that he still kept a copy of it on cassette and, once he managed to locate it, he sent me a recording of its content… though he already warned me in advance that difficulties would arise when creating a TZX from it.

Having a look at the WAV file, the reason for the errors was clear:

Rather than the tape having physical damage to the tape, it looked like it had been partially degaussed at that point (perhaps when using an old recorder?). So, with some patience, I attempted to normalize the waveform so that it always passed through the center, in case that those bits hadn’t been completely lost…

And after testing this fix… mission accomplised!

The screen now loads without errors (which verifies that its checksum is correct) and it proceeds to load the rest of the blocks normally, all of which are now all perfectly preserved.

Hert couldn’t imagine what he was going to find when he volunteered for the risky mission of lighting the great fire. According to legend, the camp lived through times of great splendor when the fire held back all evil with its heat.

The broad objective is to light the great fire, for which you have to do a few things first … There are several keys that open the corresponding doors, the lock of which is represented by a flashing key of the same color. There are three enemies on each screen which take away energy on touch and follow defined paths. It’s not always easy to avoid them, but we have plenty of energy.

With very Phantomas-style controls (up and down for long and short jumps, respectively), we have an energy bar to overcome all the screens while keeping the enemies as away as we can, or rather find the way in which they’ll take away the least amount of energy possible, since in many cases they’ll be impossible to avoid. The space bar will be quite useful in certain situations, since our protagonist may get trapped when falling into some traps (something that, if not careful, you can already see for yourself on the first screen).

Apart from obtaining all the keys you can find to use in the locks, you will also have to collect the firewood and matches, as well as find the right place to light them (which will happen automatically once you are in the right place).

The downside of this version of the game is that it’s impossible to finish as is, since one of the enemies on the last screen causes the last lock to not materialize, which will also remove the door needed to exit and finish your mission.

To solve this and, incidentally, make things a little easier, you will have to load the game with MERGE “” and, before the RANDOMIZE USR, enter the following POKE to limit the number of on-screen sprites to 3:

With this and a little skill, you’ll be able to contemplate the game’s ending in which, curiously, we are provided with a password to use in its sequel. Will we ever get to see Ogerox II? Likely not, but stranger things have been seen.

Other POKEs published in the magazine:

Here’s a complete walkthrough of the game (with the 3 simultaneous sprites limit applied), in case that you are curious abouy it but don’t have an emulator or Spectrum to try it out:

Here’s a temporary link to the game’s TZX, play and share!

Many thanks to Roberto Oliva for locating the tape, sending the recording over and allowing us to share the game with you.