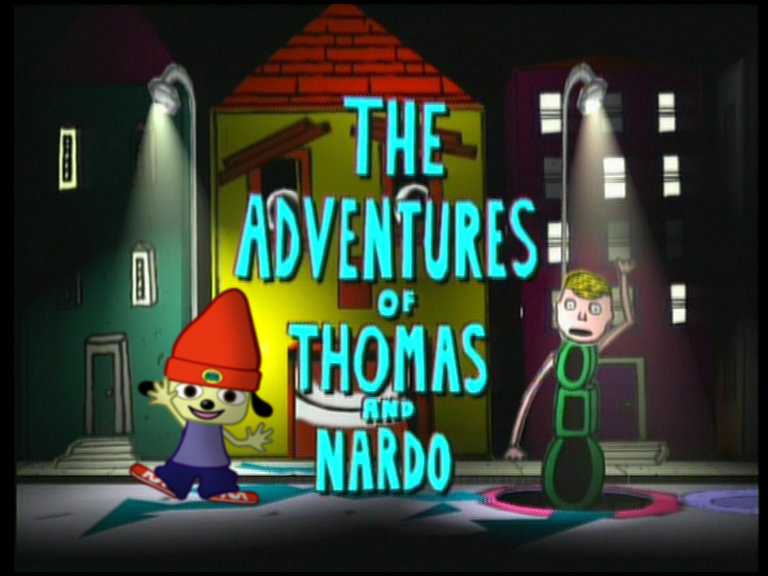 Many of us have fond memories of PaRappa the Rapper, the star of a (brief but partially reissued) series of PlayStation games filled to the brim with friendly flat characters in a fully 3D environment.

If you’re familiar with their characteristic style, this might remind you a bit of something:

What do we have in front of us? A sinister parody in the vein of Robot Chicken? Nothing further from reality.

This is the intro of “The Adventures of Thomas & Nardo”, a miniseries of five 2-minute episodes created by Mark Beyer for the Liquid Television program and aired on MTV back in 1992, four years before the debut of Sony’s rapper pup.

Its animation director, Richard Fernald of Panther Productions, tells us a little about how it was done:

I was the animator and director of animation as well as the creator of that particular animation style (Compu-cut: short for computer cut-out animation) in the “Thomas House” series.

I was running a render farm of 8 Mac 2s all accelerated to a “scorching” 40Mhz and although I was using cutting edge software at the time (ElectricImage) each frame still took 2 hours to render and this was only after countless tests concerning timing, lighting, tex maps, etc.
It was a monster of a job for its day.

Maybe someone from the team responsible for the animation of these shorts was involved in the development of PaRappa The Rapper? It doesn’t seem to be the case:

Years later, Rodney Greenblat, who I had never heard of till this posting (not that that holds any weight), may have been under the same constraints… dunno.

When I first saw the PaRappa vid game I, too, thought maybe it was a direct lift but honestly that style mostly came from the need to simplify the animation due to shortcomings in hardware and software at the time (1992).

It goes without saying that the PaRappa team did not work with the same limitations either on budget (they worked directly for Sony) nor on technology (we are talking about 1996, when a home console could already move complex 3D scenes in real time).

In defense of Rodney Greenblat, it should be noted that his usual style is exclusively in 2D and that the idea of introducing his flat characters in a 3D environment was from the game’s producer Masaya Matsuura, as he himself says on his website:

When I went to meet Matsuura’s team, they had already made a crude animation demo of the rap-music-simon-says-game using my characters from my 1993 CD-ROM Dazzeloids. Matsuura’s animation people loved the flatness of my work, and thought of creating flat characters who move around in a 3D world. Playstation was a first generation a 3d platform, a real technical feat at the time.

Let’s see some of the reasonable likenesses which can be found between the five episodes of the series and the three games:

Personally, I don’t remember seeing many games (featuring flat characters in rough 3D scenes or not) in which, during the brief adventures of their protagonists, they get on a crazy yellow car, talk to a street vendor, interact with a group of firefighters, get on a plane and make use of shringing rays.

Could those be just coincidences or did Matsuura really seek to replicate the style and certain situations of the MTV miniseries? 🤔