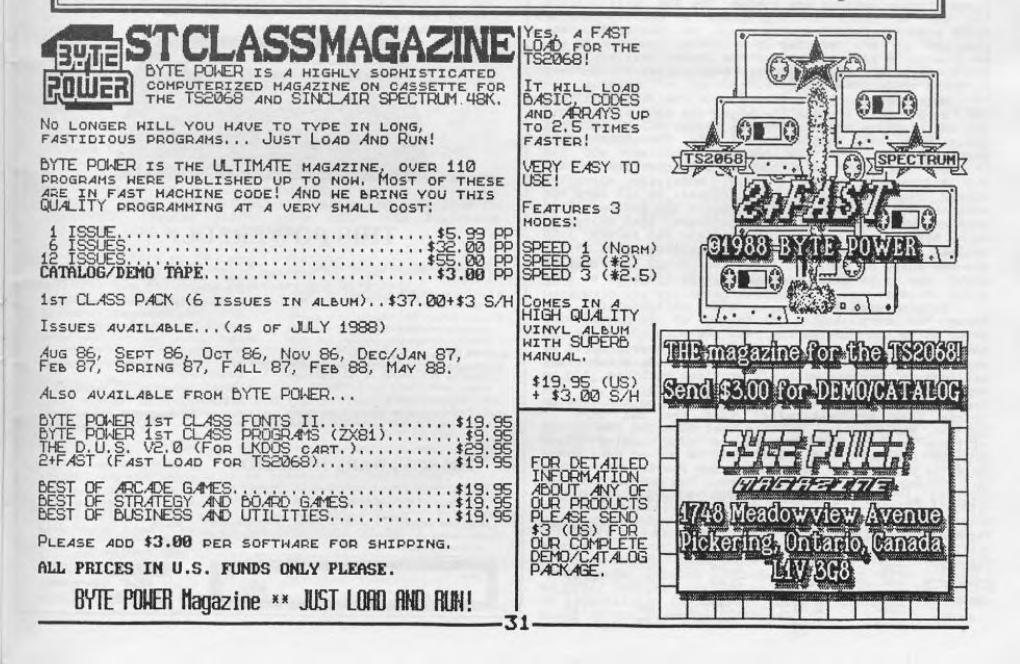 These included their own original games and utilities, created by the brothers Kris and Eric Boisvert.

So far, only the February 1988 tape has been dumped in TZX format and no copy is known to have been scanned.

Time Designs magazine featured an article about the February 1988 tape:

Some of the best programming around

If you really want your Timex Sinclair 2068 to work for you like it was originally intended to do, then you need to take a look at some of the very excellent programs written by Eric and Kris Boisvert of BYTE POWER.

To date, they have put together ten “issues” of their electronic magazine on cassette, which adds up to over 100 programs for the 2068! (Byte Power Magazine is also Spectrum compatible).

In the most current issue, the cassette contains nine programs, plus documentation in a text file. “CONFLICT” has some of the best screens we’ve seen, perhaps only rivaled by a few commercial Spectrum programs. There are four other games, plus a lotto number selection program, a music utility, and a boot utility for the Larken LKDOS cartridge.

If you have never seen what this brilliant software team has cooked up for the TS2068, then you need to send for a sample issue of Byte Power for only $5.50. Write to: 1748 Meadowview Ave., Pickering, Ontario, Canada LIV-3G8. Now there is no reason for anyone to complain about the lack of good T/S software…there’s plenty of it available from Byte Power!