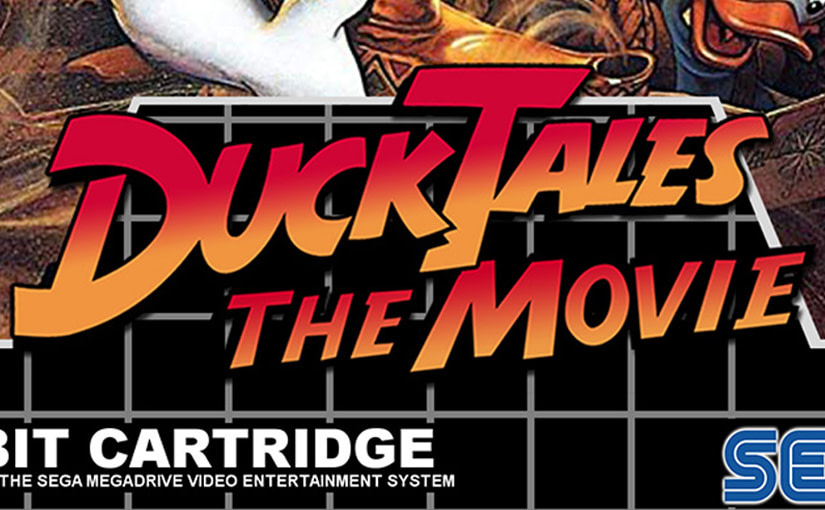 QuackShot, the classic Mega Drive game where you control a (treasure-hungry) Donald Duck without his typical sailor suit and where Uncle Scrooge only has a small cameo in the intro.

Could this game have originally been based on the well-known series DuckTales? Some details seem to hint at having been inspired by the series/movie.

Was the game entirely inspired by the comics?

Obviously, it is possible that the game was simply designed around the comics in which Donald did star in adventures with his nephews, but some elements of the game which are unrelated to the comics could make more sense if we keep in mind the possibility of them being based on the cartoon series.

Let’s start with the most obvious one, that “Indiana Jones” styled logo which both QuackShot and DuckTales share:

The shapes of the letters in general and the way they seem to be joined together by some parts are very similar in the respective logos, not to mention that both cases involve two words merged into one.

There’s even some details of the in-game logo which are directly based on DuckTales’ and do not appear on its cover, such as the way in which the “K” overlaps the next letter and the angle in the lower part of the “T” (none of these peculiarities are present in the Indiana Jones logo).

Both Quackshot and the DuckTales poster have both characters also appear with very Indy-esque outfits:

And also, let’s not forget the biplanes present in the series and in the game… in which it’s piloted by the nephews for some strange reason:

As a separate note, it is curious how the film’s logo takes its gradient directly from Indiana Jones’, instead of the vertical one displayed in the series. Might have had to do with the fact that Disney also got renowned illustrator Drew Struzan to make the poster.

Did Capcom have exclusive console rights?

The explanation of the coincidences between QuackShot and DuckTales might lie in the success of Capcom’s video game for the NES and Game Boy (released in 1989 and 1990, respectively) which, in addition to taking place all around the globe, also has similarities in some of its locations and even in one of the bosses!

In the case that Capcom had an exclusive license to release console games based on the franchise, SEGA could have tried to get a product as similar as possible without angering any lawyers.

But what if those rights weren’t exclusive and SEGA or any other companies could have actually released their own DuckTales, as happened with subsequent series such as Darkwing Duck and Tale Spin?

The Treasure of the Lost Lamp

Now let’s put some context to the situation. In August 1990 the movie “DuckTales: The Treasure of the Lost Lamp” is released in cinemas, continuing the series which had just ended its run and was still moving a lot of merchandise.

Three months later, SEGA would publish its first collaboration with Disney “Castle of Illusion” for Mega Drive/Genesis, Master System and Game Gear, whose resounding success made it clear to both companies that they could do nothing else than continue their alliance.

And so it was that SEGA got down to work and the following year was ready to announce its next big Disney game already, along with other instant classics like Streets of Rage or ToeJam & Earl. At Summer CES in June 1991, SEGA would unveil QuackShot.

Would it have been a better idea to announce a DuckTales for the Mega Drive instead? At first glance, it might seem that this would have been the perfect opportunity to unveil a game based on the hit movie based on the series… except for the small detail that it obtained quite modest box office results and its planned sequels were canceled, putting a definitive end to the franchise (if we count the 2017 reboot as a separate thing).

This would have been a good reason, in case of having a DuckTales game project in hand, to consider replacing any reference to the series with other Disney nods which could have a more positive reception by the general public.

Were there really any plans for a SEGA DuckTales?

Until some internal SEGA contact shows us some evidence or designs, or prototypes of the game start coming to light somewhere, all we can say about this subject will be mere conjectures, although… there is still one small detail which could be giving us a hint.

Perhaps you will remember that, apart from shooting plungers, Donald’s other main gimmick in this game is “diving” on the ground. Doesn’t it remind you of another certain character?

I’ll just leave it there! 😁