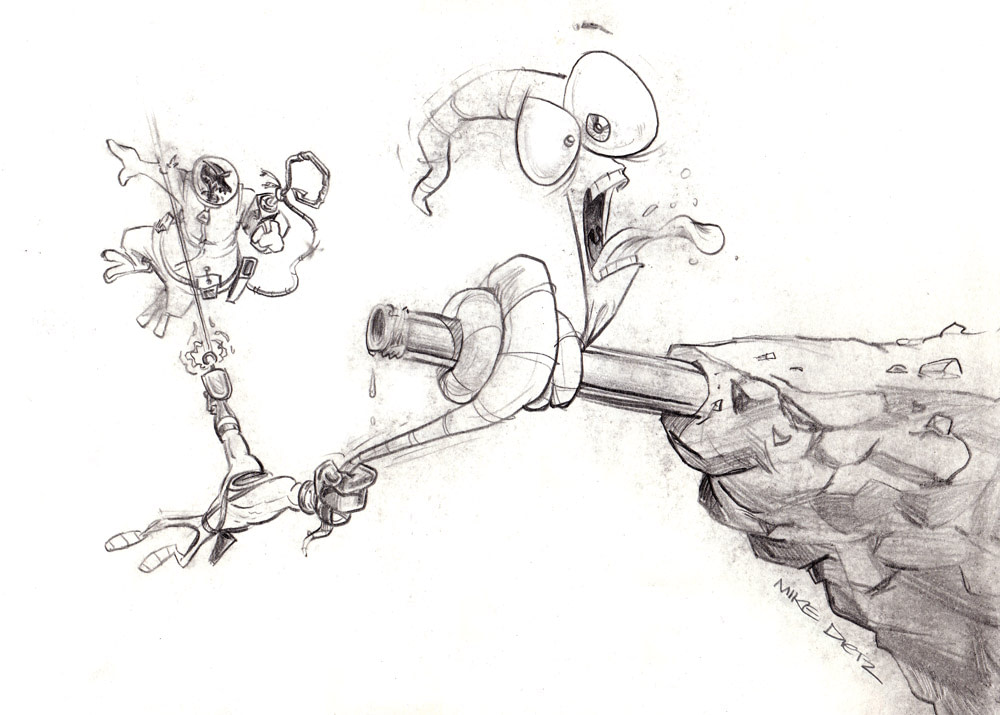 Designs created by Mike Dietz for Shiny Entertainment during the development of Earthworm Jim 2.

Among them we can see concepts for the intro and Snott, as well as other designs for items, enemies, levels and abilities, some of which didn’t get to see the light.

Concept for the accordion animation on startup.

Concepts for Snott’s parachute and swing abilities, as well as a discarded “Snott helmet”.

Concepts showing alternative ways of getting Jim’s head inflated and deflated, and an unknown environment with cow head trophies.

Sketches for the masked lawyer enemies, alternatively doning an axe in place of their mace.

Concepts for the “door chase” level.

Concepts for Jim’s many alternate guns.

Many assorted sketches of unknown purposes, including pot-belly Jim, fighting Jim and some gladiator-ish enemy.

The “spikes are good” concept might have evolved into the mashers which Jim must go through in order to proceed, in ISO 9000?

Discarded running animation for Jim, more similar to the one featured in the Intellivision Amico game.

Frames for the unknown gladiator-ish enemy.

Frames for Snott’s throw and swing.

One of the end of level animations.

Bob the Goldfish’s demise in this sequel.

Among Jim’s different expressions, we can also see him leaning over an object, similarly to his pose in the cover for the Windows release and also in a kind of similar way to his panting animation in Puppy Love.

The secrets of Thor (ZX Spectrum)